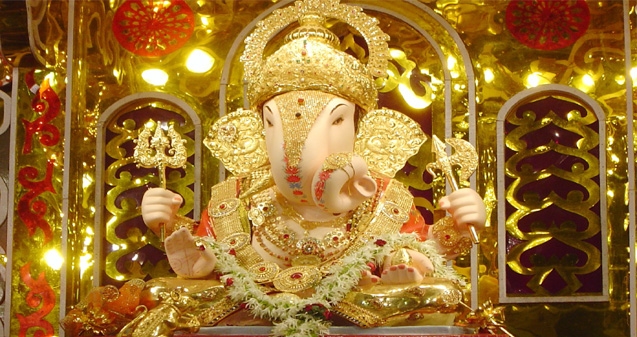 Ganesh Chaturthi, the major Ganesha festival also known as Vinayaka Chaturthi or Vinayaka Chavithi is celebrated with great enthusiasm by the Hindus. This festival is not only rejoiced greatly in India but is also celebrated in the foreign countries in pure Indian manner. Ganesh Chaturthi falls in the Hindu month of Bhadrapada, usually in between the months of August and September, according to the Gregorian calendar. This grand festive occasion lasts for ten days with the grandest celebrations held in Maharashtra, Goa and Andhra Pradesh. These states in particular are popularly known for the exclusive splendour with which the festival comes to life. During the ten days of festival, people sing Ganesha songs, dance, burst crackers, perform traditional rituals, observe fasts, wear new clothes and decorate their houses. However, it's the Pooja (ritualistic worshiop) which is the most important aspect of the festival. People perform this special pooja of Ganesh Chaturthi with proper rituals and pure heart and mind. Read to know how to perform Ganesh Chaturthi Pooja in a complete and traditional manner.

On the day of Ganesh Chaturthi, devotees take ritual bath, wear new clothes and get ready to perform the Vinayaka Chaturthi Pooja. Then, the beautiful clay idol of Lord Ganesha is brought to the house and pandal with the face of the idol covered with a saffron cloth. After this, the idol is placed properly on the makhar in the houses and pandals. The idol is then beautified with fresh flower garlands and sandalwood paste. Before invoking Lord Ganesha, a kalash i.e. the earthen or brass pot filled with holy water is established with the rice kept down the kalash. This is called as Purna Kumbha Kalasha Sthapana. After this ritual, the holy ritual called as Pranapratishtha is done to invoke life into the idol of Lord Ganesha with the chanting of the consecrated mantras. This ritual is followed by another known as Shhodashopachara i.e. 16 ways of worship. For performing this ritual, there are various things which are required and it includes coconut, 21 modaks, betel leaf and betel nut, 21 blades of dhruva grass, incense sticks, sandalwood paste, sindur, camphor, cotton wicks. The number 21 denotes the five organs of action, the five organs of perception, five essential pranas, five elements and the mind. Devotees try performing the rituals of Ganesh Chaturthi Pooja with a clean body and pure mind and heart.

While performing the rituals, Vedic hymns from the Rig Veda and Ganapati Atharva Shirsha Upanishad are chanted and along with this, Ganesha Stotra from the Narada Purana is chanted. After chanting the mantras, Ashtottara Shatanamavali or 108 names of Lord Ganesha and the Ganesh Chaturthi Katha is recited. Then, at the end of performing all the rituals, Ganesha aarti is recited and is performed by using the earthen lamp (diya) with the cotton wick dipped in pure ghee. This is performed twice a day: in the morning and in the evening. People offer prasad of modaks, laddus, pedas, charnamrit made up honey, curd, ghee, milk and fresh flowers to Lord Ganesha. After all this, people bow in front of the idol of Lord Ganesha and pray for the well being of everyone. They also apologise for any mistake done while performing the rituals.

Ganesh Chaturthi is celebrated from the Bhadrapada Shudh Chaturthi, the first day on which the idol of Lord Ganesha is brought from the market and is placed with great honour in the houses and pandals. From this day, Lord Ganesha is worshipped with great belief and respect till the last day i.e. Ananta Chaturdashi, on which the idol is taken in grand procession with great pomp and joy by saying "Ganapathi Bappa Morya, Purchya Varshi Laukariya" which means "O father Ganesha, come again early next year." Then, the idol is taken to be immersed in a river or sea. 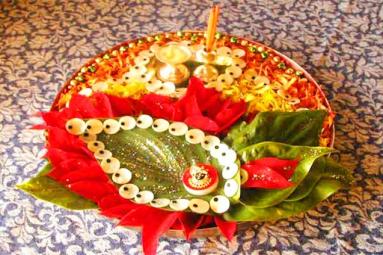 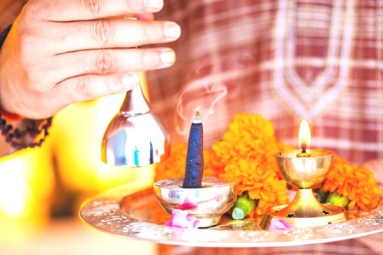 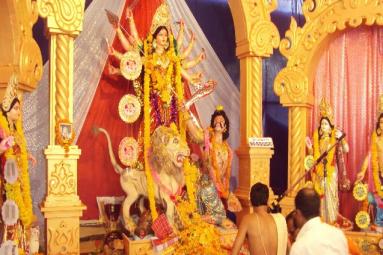