Kerala IT CEOs do Flash Mob on "Lungi Dance"

Kerala IT CEOs do Flash Mob on "Lungi Dance"Top Stories 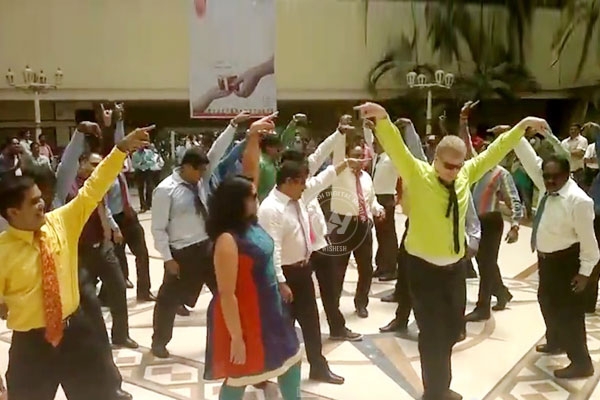 (Image source from: Kerala IT CEOs do Flash Mob on "Lungi Dance"})

Kerala's IT CEO's have proved that they can shine on the dance floor just like they do at their meeting rooms and conference halls. Over 30 CEOs of well known companies located in the Thiruvananthapuram Technopark on Tuesday participated in a Flash Mob surprising their employees.

The Flash Mob by Kerala's high profile CEOs was part of Daan Utsav, an annual Festival of Giving celebrated in the country.

Much to the surprise of their employees, the group of 30 CEOs set the dance floor on fire to raise awareness and money for the country's underprivileged. With their novel action, the IT bosses have set a brilliant example for CEOs across the world.

Every year from October 2 to October 8 the country celebrates Daan Utsav. The weel-long celebration aims to bring Indians from all walks of life together and to celebrate "giving".
Daan Utsav was first launched in 2009.

Girish Babu, CEO of Technopark stated that they wanted to draw attention of all the 45,000 plus employees in Technopark towards the noble cause. That was the reason why CEOs themselves hit the dance floor. Mr Babu hopes that the message of 'Joy of Giving' would be embraced by the entire  society.

According to Tehcnopark Today, the 30 IT bosses get full marks for the flash mob. Their effort is commendable as they nailed the choreography perfectly, inspite of having the responsibility to run a company while rehearsing.

The Flash Mob by the CEOs drew a rousing cheers from all the employees at the atrium in Bhavani building. They danced to a medley of popular songs including the Hindi song "Batameeze Dil", Malayalam song "Oru Madhurakkinavin Lahariyil" and Tamil song "Ilamai Itho Itho". The IT bosses got the loudest cheer for dancing to the beats of "Lungi Dance".

Stalinrajindian posted the video titled "Technopark CEOs on Dance Floor" on YouTube with the caption: "First time in the history of Technopark, A flash mob conducted by company CEOs in the Bhavani Atrium, As part of #DaanUtasv"