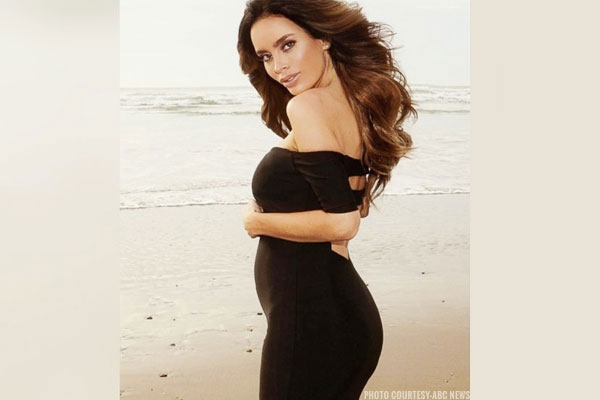 The pictures of model from Los Angeles who is presently eight and -a-half-month pregnant posted on Instagram and other social media has raised eyebrows about her tiny belly, though she is few weeks away from delivery.

Her abs seemed to have remained sleek and toned during her pregnancy.

“Eek officially 81/2 months... And he's now 5lbs,” she posted on one of her latest Instagram pics.

Her 1.3 million social media fans are into conversation whether she looks fit or famished.

“Check this out...almost 9months pregie and look at that tummy!!!” Commented one of her fan on an image posted which showed her posing in lingerie.

”Hope I look like this when in 8 months pregnant,” wrote another on a post that has received over 10,000 comments.

“Where's this baby hiding at?? Definitely not her tummy!!" one wrote.

Some of her followers advised her to seek medical attention.

But according to experts, Stage is exactly where she needs to be at this stage in her pregnancy.

“She is young, tall, slim and it’s her first baby so she has all that going for her,” said Dr. Jennifer Ashton, ABC News medical contributor and a practicing obstetrician and gynecologist. “She has gained the appropriate amount of weight for this point in her pregnancy and seems very healthy.”