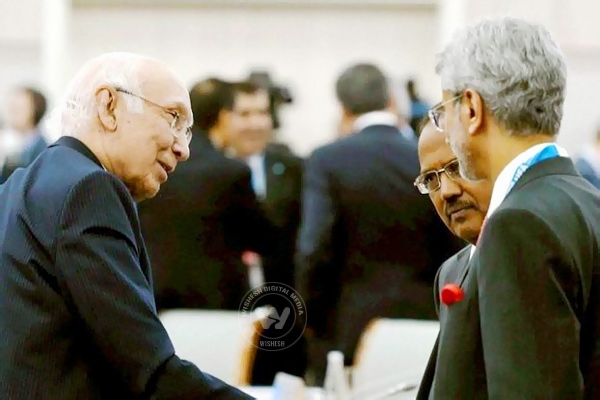 All set for a showdown with neither India nor Pakistan willing to back down on Sartaj Aziz's, Pakistan NSA, meeting with Hurriyat leaders in New Delhi. The Aziz-Hurriyat leaders meeting may put NSA talks in uncertainty unless one of them takes a back step.

According to sources, with neither side willing to back down, the NSA-level talks are now hinge on the issue.
On Friday morning the MEA released a statement that said, "India has advised Pakistan yesterday that it would not be appropriate for Mr. Sartaj Aziz to meet with Hurriyat representatives during his visit to India as it would not be in keeping with the spirit and intent of the Ufa understanding to jointly work to combat terrorism.”

From the time when the Pakistan High Commissioner invited Hurriyat for a reception on 23 August 2015, India has been mulling over it. Indian Government even ordered arrests on Thursday against Hurriyat leaders, in a move to prevent them from travelling to New Delhi. However, Mufti Mohammed Sayeed, Chief Minister of Jammu and Kashmir ordered their release.

Meanwhile, Pakistan’s Ministry of Foreign Affairs made it clear that it would go ahead with the meeting. A spokesperson said that it was normal practice and Islamabad expected India to allow the meeting.

Also read: Pakistan Has Surprise From India In Next Week's Talk