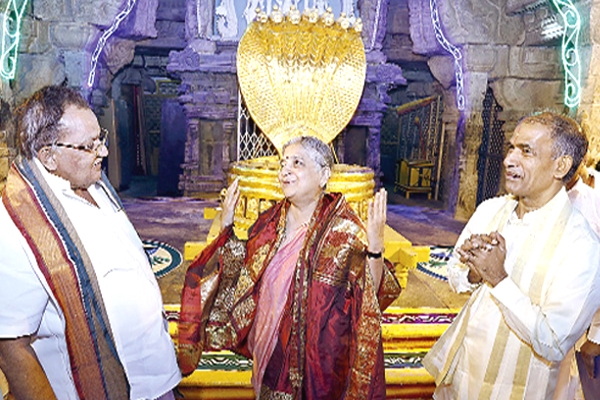 Renowned Social worker Sudha Murthy took oath as a member of the trust board of the Tirumala Tirupati Devasthnams (TTD) on Sunday (Feb 19). The executive officer of TTD D Sambasiva Rao administered the oath at the Tirumala temple.

After offering her prayers to Lord Venkateswara, Sudha Murthry was rendered Vedasirvachanam by Veda pundits in Ranganayakula Mandapam. Later Murthy was presented with prasadams along with a laminated photo of the Lord Venkateswara by the Chairman of TTD trust board Ch Krishna Murty.

Murthy then thanked Lord Venkateswara for providing her the opportunity to serve the pilgrims. She said that almost six decades ago, she visited the sacred place to attend a family ritual. Now Murthy is excited to be a part in the service of the Almighty.

Amul celebrates ISRO’s success in its own way