From being an unwelcome person to a fashion icon, Indian prime minister Narendra Modi's image has changed ever since he won a stunning electoral victory.
https://mail.wishesh.com/ 07 Jun, 2014 07 Jun, 2014 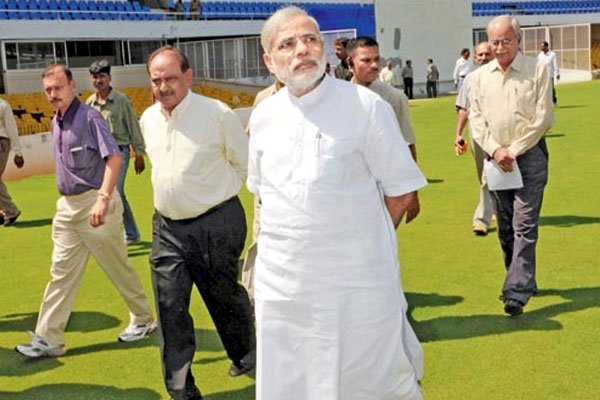 Power indeed has its benefits. From being an unwelcome person to a fashion icon, Indian prime minister Narendra Modi's image has changed ever since he won a stunning electoral victory. The US media is busy decoding Modi's fashion style before his September visit to Washington.

Ahead of Modi's September summit with President Barack Obama, three leading US publications - Time, New York Times and the Washington Post - have written on his style statement. It's interesting how the three major publication wrote on his trademark 'Modi Kurta', while trying to "decode India's new leader".

Time said, "India's New Prime Minister Is the Country's Latest Fashion Icon." The publication went on to say,  "With his shortened tunic, or 'Modi Kurta,' Narendra Modi is becoming as celebrated for his style sense as he is notorious for his controversial political past."

Modi's accessories were also mentioned. Time suggested Paired "with Bvlgari shades and a Movado watch (he's got penchants for them both)," Modi's "ensemble is about as mixed as his record as a political leader, really".

Time also praised Modi's leadership in Gujarat (his home state), where he was instrumental in bringing an impressive economic growth. It also mentioned about the contententious Gujarat riots of 2002 that resulted in the killing of over 1,000 people. However, it hastened to add parenthetically, "He has been officially cleared of any wrongdoing.

"Narendra Modi: A Leader Who Is What He Wears" claims the The New York Times. "Even by the standards of a world...the image-craft of India's new prime minister, Narendra Modi - and its fashion fallout - has been something of a case study."

The magazine says that Modi's associates his personal style with his political platform, which complements both...

Modi Kurta actually symbolizes a set of values rather than representing an extraordinary aesthetic style, when seen objectively. Therein remains the allure of his kurtas, adds Time.

While decoding Narendra Modi's fashion and his politics, the Washington Post says: "Move aside, Michelle Obama. The world has a new fashion icon." It goes on to say that it's not Vladimir Putin but India's new prime minister, Narendra Modi.

Even Washington Post had something to say about Modi Kurta. "Countless articles have been written about his look, from his vast collection of hats to his iconic long tunic, the #ModiKurta. Yes, it has its own hashtag," reports Washington Post.

The Post went on to say that inspite of his "carefully cultivated Hindu nationalist image", Modi is a fan of European designers." Modi's accessories were mentioned, "His glasses are said to be Bvlgari, and his watch is Movado, two brands at odds with his traditional Indian look but in keeping with his pro-business ideology." added the Post.

Meanwhile Obama and Secretary of State John Kerry have both said that they look forward to welcoming the Indian prime minister to Washington, said State Department spokesperson Marie Harf.

The US is determined to have a good strategic relation with the newly formed Modi-led NDA government. Both the countries are proceeding with utmost caution due to the political stasis that had crept into the Indo-US relationship in the last phase of UPA-II government. Besides, the US had serious issues over Modi's handling of the Gujrat riots in 2002. The Indian PM was even denied a US visa in 2005.