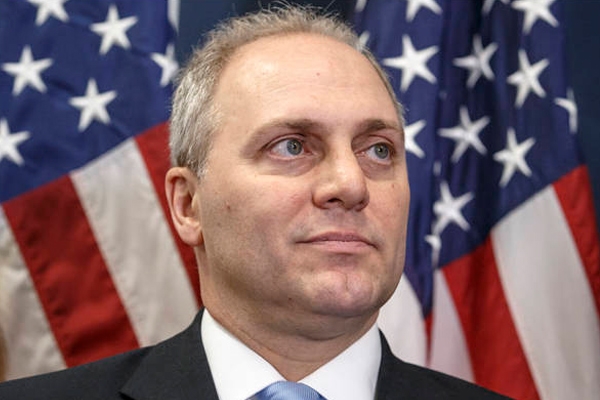 Steve Scalise Shot In Virginia Republican Steve Scalise was in a serious condition on Wednesday night after he and also three others were shot as they were practicing baseball for a charity.
https://mail.wishesh.com/ 15 Jun, 2017 15 Jun, 2017

Congressman Steve Scalise, a Republican in the House of Representatives, was in a serious condition on Wednesday night after he and also three others were shot as they were practicing baseball for a charity.

The gunman, who had posted angry messages on social media against President Donald Trump and also other Republicans has opened fire on a group of Republican lawmakers and also colleagues at the baseball field in Alexandria, Virginia, outside Washington. He was wounded in the gunfight with Capitol Hill police at the scene and was later died.

Scalise has been shot in the left hip, suffering with broken bones, injuries to the internal organs and also severe bleeding.

"Rep. Steve Scalise, one of the truly great people, is in very tough shape - but he is a real fighter. Pray for Steve!" Donald Trump said on Twitter after visiting the hospital on Wednesday night.

The gunman has been identified by police as 66-year-old James Hodgkinson from the St. Louis suburb of Belleville, Illinois. He repeatedly fired at the men playing on the baseball field on Wednesday morning.

Congressmen at the ballpark has described hearing firing noises like the sound of firecrackers and 15 to 20 people were lying on the ground and realizing that they had only baseball bats to defend themselves against the bullets.

"When he started shooting, he was shooting to kill people. And thank God he wasn't a very good shot," said the Republican team's manager, Rep. Joe Barton.

The wounded were a congressional aide and also one former aide who now works as a lobbyist, said the officials. One Capitol Hill police officer has suffered a gunshot wound and also another officer twisted an ankle and was released from the hospital, said the police.

"It was not only chaotic but it was a combat situation," the Alexandria Police Chief Mike Brown told to reporters.

New Law To Save Minors From Human Trafficking