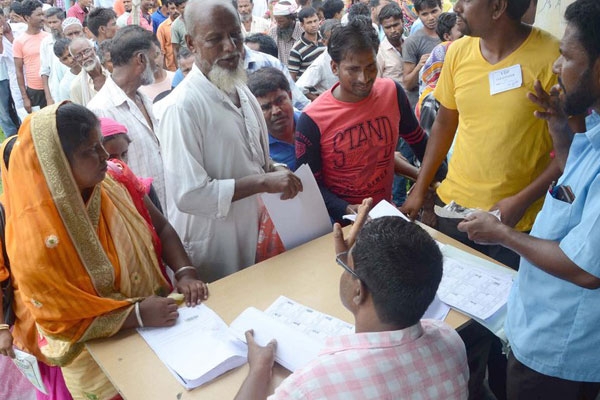 ‘Ineligible Persons’ To Be Removed From Citizens Register, Says NRC Authorities Under the guidance of the Supreme Court, in August last year, of the 3.3 crore applicants in the National Register of citizens, 19 lakh-applicants were excluded.
https://mail.wishesh.com/ 14 Oct, 2020 14 Oct, 2020

Under the guidance of the Supreme Court, in August last year, of the 3.3 crore applicants in the National Register of citizens, 19 lakh-applicants were excluded.

The State Government of Assam aims at re-verifying names of the citizens by 10-10 percent in order to get a “correct” register.

Hitesh Dev Sarma, the state coordinator of the NRC, stated in a letter that “some names of ineligible persons” — persons declared as a foreigner by Foreigners Tribunals (DF), persons marked as Doubtful Voters (DV) by the election officials or persons whose cases are pending at Foreigners Tribunals (PFTs) and their decadents — “found entry to the NRC”.

Anyone falling in the above categories would be kept out of NRC and this has been decided by laws governing the preparation of NRC.

This verification is mandatory so that there is no confusion with the identity of a person in the future.

Sarma wrote “The verification would mandatorily require the correct identity of the person so that no ambiguity arises in future so far as the identification of the person is concerned,”

He added: “You are, therefore, requested to submit the list of such persons who are not eligible for having their names in the NRC along with speaking order justifying reasons for each case for necessary action for deletion of such names.”

They have started the process of deleting names from the NRC of ‘declared foreigners’, ‘doubtful voters’, the ones having cases pending at FTs and their descendants.

Several districts are still sending names and they don’t find it appropriate to make a mention of the inclusions into NRC right now.

Officials say, they are in pipeline to prepare a centralised database of people declared or suspected to be “foreigners” similar to cases at Foreigners Tribunals and investigations by the Border branch of the state police.

Assam Chief Sarbananda Sonowal, at a rally in Dibrugarh earlier this month said that the government’s appeal seeking re-verification is still pending at the SC.

Even now, the Assam Government is firm on its demand for a 20% re-verification in border districts and 10% elsewhere of the names included in the final NRC.

It has even been said that the former NRC Co-ordinator, Prateek Hajela, is responsible for including and excluding wrong information.

Hajela is replaced by Sarma, an Assam Civil Service officer who had served as Executive Director of the NRC from 2014 to February 2017.

According to officials, Covid-19 is the reason for this issue being prolonged. However, they have planned to re-check names and the process has already begun.

Over 20 killed in Assam floods, Rajnath to assess flood damage