Church of HallgrimurPlaces of Worship 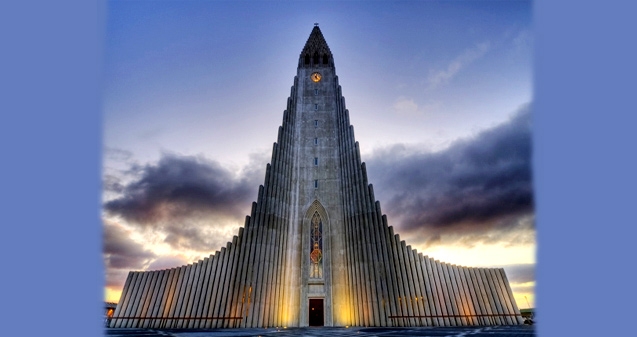 The Church of Hallgrimur, also known as Hallgrimskirkja, is a Lutheran church located at Reykjavik, Iceland. It sits high on top of a hill located within the center of the city. It is also considered as one of Reykjavik s most striking landmarks and the country s largest church.

The Church of Hallgrimur was named after a famous Icelandic poet and clergy man, Hallgrimur Petursson, composer of the Passion hymns that is still being sung today. The design for the church was commissioned to state architect Guojon Samuelsson in 1937. The design was intended to resemble the natural landscape of Iceland with its volcanoes, ice caps and basalt columns.

After the design for the church was completed, construction of the structure began sometime in 1945. It took around 38 years to build the church which was finally completed in 1974. Its nave was consecrated in 1986.

The church tower stands 74.5 meters or 244 feet high, making it the tallest building not only in Reykjavik but in the whole of Iceland. It stands in sixth place when it comes to being the tallest human made structure in Iceland. The top five are all communications masts built in Iceland.

The main feature of the church is its imposing tower which is uniquely designed to resemble the basalt column common in the country. Visitors may be able to come up the church tower via an elevator. As the tallest building in Reykjavik, it also acts as an observation tower where people can get the best views of the city and the surrounding mountains.

The church is primarily built out of poured concrete and follows expressionist architecture in terms of style. Its interiors are considered simple and features minimal design in line with the Lutheran tradition. The church also houses a large pipe organ consisting of a 50 foot case and 5,275 pipes.