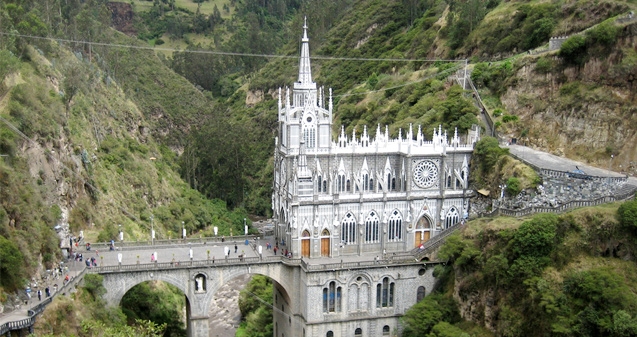 Las Lajas Cathedral – This temple built on the bridge as if hanging over the abyss between the steep slopes of the picturesque canyon Guaitara. Structure, similar to a fairytale castle – known to the world the Las Lajas Catholic Church (Spanish: El Santuario de la Virgen del Rosario de Las Lajas en Ipiales), glorified the Colombian city of Ipiales, a few kilometers from where it is located. Unusual church looks so tenuous that it seems to set foot on the rickety bridge, and shaky vision dissolved at the same moment as a deceptive mirage.

This construction withstands the steps of the countless army of pilgrims arriving here all the year round to look at the evidence of one of the most mysterious in the stories of miracles, where you can come into contact with the unknown, to believe in the unseen and get rid of unhappiness. And so began an amazing story.

Back in 1754 a poor Indian woman Maria de quinone Mueses with his little deaf-mute daughter (Rosa), which she carried on her shoulders, wandered far from the place where today rises to the clouds Las Lajas Cathedral, accidentally came across louche cave. The locals have long been avoided by her side.

A sudden downpour forced the woman with the child to seek shelter inside the cave, where they had been apparition of the Virgin Mary, who returned the ability to hear and speak, to the child.

Some time later, the picture of the Virgin with the Child in her arms appeared on the stone arches of the cave. The thousands of people come to find healing and regain health to this “wonderful face”. In 1794, a small chapel was built near the cave, where many pilgrims carrying candles and flowers to the Virgin Mary. The people said, that this chapel was built with funds raised by blind vagrant named Juan Fry. They also say that when he laid a last brick, his eyesight was restored immediately.