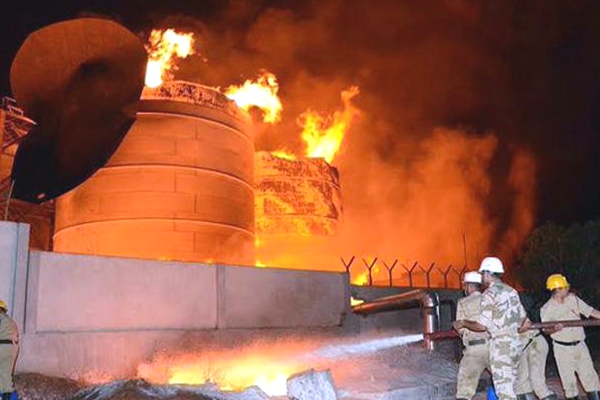 Biodiesel plant in Visakhapatnam, 12 out of 18 storage units in fireTop Stories

A massive fire broke out at a biodiesel factory in the southern Indian port city of Visakhapatnam, Andhra Pradesh. The blaze is yet to be controlled. More than 40 fire tenders have been deployed. No casualties have been reported so far.

Minister for HRD Ganta Srinivasa, who have reached the spot, confirmed that there were no casualties.

Visakhapatnam District Collector N Yuvaraj, who was at the accident site, said that nearly 40 fire fighting engines from Navy, Visakhapatnam Steel Plant, and Port Trust were making all out efforts to contain the fire, that has erupted at the Bioxmax Fuels Ltd company premises in Duvvada area at around 7.30 PM yesterday.

Of the 18 fuel tanks, which store crude oil and biodiesel, 12 have caught fire. Each unit has a storage capacity of about 3,000 litres and all the tanks were filled anywhere between 30% and 70% of their capacity. There were about 15 employees of the plant when the fire started, all of them escaped. Two of them suffered minor injuries.

The Biomax facility at VSEZ has a manufacturing capacity of 5 lakh tonnes per annum from multi-feed stock and is considered to be one of the biggest bio-diesel plants in the country.

The Collector said that out of 18 storage tanks located at the site, 12 has caught fire. It is expected to be brought under control by this evening as the entire oil in
the tanks has to burn out completely, he said.

“It was like an action replay of the 1997 HPCL fire accident that claimed 60 lives. Fortunately, there was no life loss or injury in this case, as per the initial assessment. But the intensity is almost similar,” said District Fire Officer (DFO) Mohan Rao.

"On getting news from the state administration, the Eastern Naval Command launched two aircraft for aerial reconnaissance and assessment of the extent of fire. Navy's Quick Reaction Team (QRT) and an ambulance with medical team were rushed to the site of the fire accident along with the fire tenders," the Eastern Naval Command said in a statement.

Standby arrangements have been made at the Naval hospital, INHS Kalyani, for providing assistance in case of medical emergency, it said.

An Indian navy helicopter is swirling above the site to keep a close watch on the situation. Some of the storage tanks were exploded as soon as the flames began to spread, but this could not be confirmed.

It is still not clear what had started the fire, district fire officer J M Rao said, adding that the fire tenders were unable to reach the storage area as the flames rapidly spread from one tank to another within minutes.