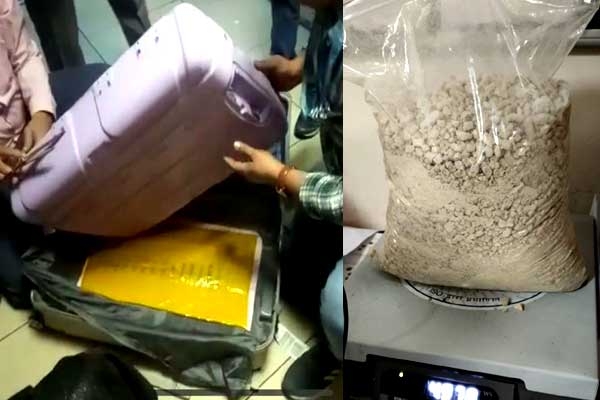 The Customs officials of the Mumbai International Airport have seized 5 kgs of heroin on Sunday and it is estimated to be valued at Rs 34 crores in the international market. The heroin was stuffed in a hole that was created in a trolley bag. The customs officials seized the trolley bag in the Chhatrapati Shivaji Maharaj International Airport as per the reports from the authorities. The traveler has been detained and the investigation has been launched. “Under Narcotic Drugs and Psychotropic Substances Act (NDPS) 1985, seized 4970 grams heroin valued at ₹34.79 Crore & arrested one passenger who has been remanded to judicial custody. The contraband was found concealed in a specially made cavity inside a trolley bag," tweeted Mumbai Customs Zone III.

Mumbai Airport Customs on 01.10.2022, under NDPS Act 1985, seized 4970 grams Heroin valued at Rs 34.79 Cr & arrested one passenger who has been remanded to judicial custody. Contraband was found concealed in specially made cavity inside a trolley bag. @cbic_india @nsitharamanoffc pic.twitter.com/dl3GEcyGnY

The trolley was seized from a lady in the Mumbai Airport a day before this incident that had 490 grams of cocaine that is worth Rs 4.9 crores. The drugs were seized in a customized cavity that is constructed in her shoe. The Customs officials announced controlled delivery laws in July 2022 and the agents are allowed to monitor illegal goods including the alcohol, tobacco, cigarettes, gold and narcotics. The goal was set up to prevent the illegal activities and indentify the culprits. The Customs agents can place monitoring devices on the suspicious packages to observe and investigate them.